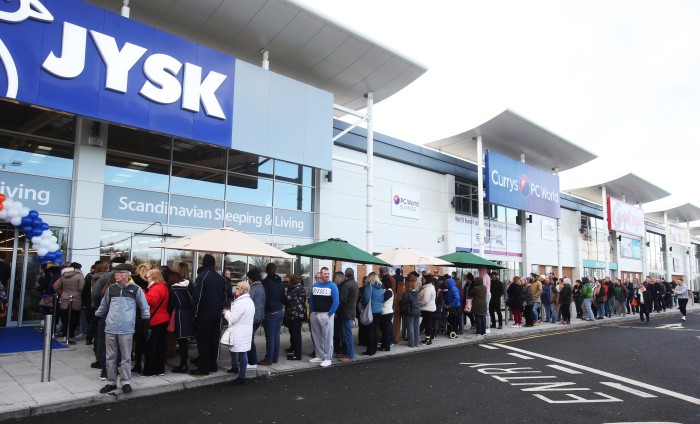 Huge interest for JYSK in Ireland

There was a long line outside the store, when JYSK celebrated the company’s 40th anniversary by opening the first store in Ireland.

The 40th anniversary of JYSK was celebrated with the opening of the first JYSK store in Ireland, which took place in the city of Naas about 40 kilometers from Dublin.

The opening created a lot of attention, and at 2 am the first customers were already waiting outside the store to be sure to get some great offers.

”I am really happy that we have been so well received, and that so many people want to be part of the opening. I know that some of you in the front of the line has been here since 2 am, and I know that my colleagues in the store will make sure that you get what you came for,” said Lars Larsen and continued.

“I know that right now only few people in Ireland know JYSK, but we will make sure to change that.”

In addition to Lars Larsen, the Danish Ambassador in Ireland, Uffe Balslev, and the Mayor of Naas, Billy Hillis, also participated in the opening.

In his short speech, Uffe Balslev expressed his joy of being part of welcoming JYSK to Ireland, as JYSK in his opinion stands for some of the best qualities of Danish business culture, while Billy Hillis just stated that it seemed like all the people of Naas was there to participate in the opening.

So far, JYSK has planned three more stores in addition to the one in Naas, and the plan is to establish 15 JYSK stores in Ireland within the next couple of years.