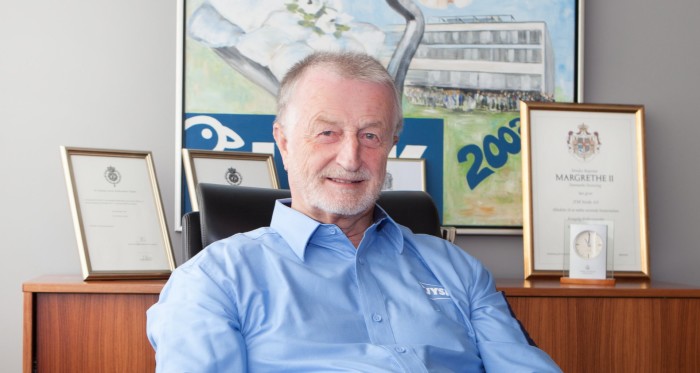 Founder of JYSK Lars Larsen has passed away

The Danish king of duvets and founder of JYSK, Lars Larsen, has passed away age 71.

This morning 19 August, Lars Larsen – or “The Tradesman”, as he was best known among colleagues – passed away peacefully in his home near Silkeborg, Denmark, surrounded by his closest family.

Lars Larsen leaves behind his wife Kristine, their two children and four grandchildren.

“Today we have lost our father, husband and grandfather, and Denmark has lost a truly remarkable tradesman. He will be missed by all of us, and once we have mourned our great loss, we will do our best to continue the development of his impressive life’s work,” says Lars Larsen’s son, Jacob Brunsborg, who in June took over the position as Chairman of Lars Larsen Group following his father’s withdrawal.

Earlier this year, Lars Larsen played a key role in the celebration of JYSK’s 40th anniversary, which in line with his spirit was marked with yet another milestone, when he personally cut the ribbon to open the first JYSK store in Ireland, thereby completing the presence of JYSK in all major European countries.

2019 was also the year in which Lars Larsen could celebrate the first 40th employee anniversary in the company he founded in 1979.

As founder of JYSK, Lars Larsen was the face of the company until June 2019, when after being diagnosed with liver cancer, he passed on the role as Chairman of Lars Larsen Group to his son, Jacob Brunsborg.

The work to secure the continued success of JYSK will carry on as it has been the case so far with Jan Bøgh as CEO & President.

“Before stepping down as Chairman, Lars Larsen was part of the decision to merge the two independent business units in JYSK Group into one. I will continue to focus my energy on this very important task to ensure that within a few years we will have a united and even stronger JYSK, which in the spirit of Lars Larsen will continue to provide great offers for our customers,” says Jan Bøgh.