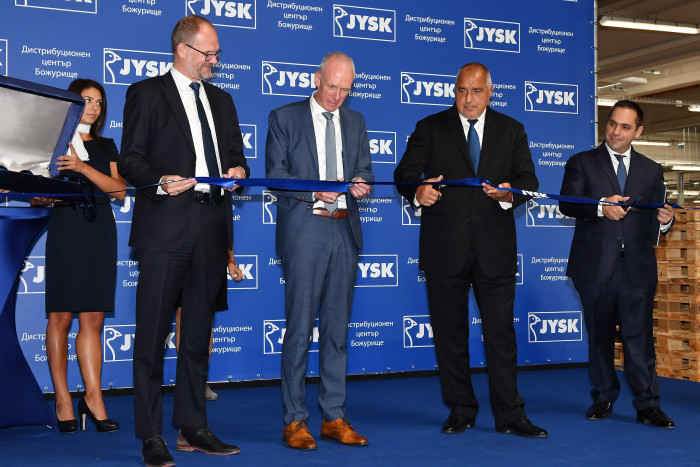 JYSK has officially opened a new distribution centre in Bulgaria, which is the most modern logistics centre in the country. Bulgarian Prime Minister Boyko Borisov was part of the opening ceremony, together with CEO & President of JYSK Jan Bøgh.

Thursday 12 September was an important day for JYSK as well as for Bulgaria, as JYSK officially opened a brand new distribution centre in Bozhurishthe near Sofia.

The official guests of the ceremony included Prime Minister Boyko Borisov, the Minister of Economy Emil Karanikolov and the Ambassador of Denmark Søren Jacobsen.

“This is an important day for JYSK, and I hope that you consider it an important day for Bozhurishthe as well. Perhaps even as important for Bulgaria as a country, and I am honoured that Prime Minister Boyko Borisov as well as other members of the government have accepted our invitation and joined us here today to celebrate,” said CEO & President of JYSK Jan Bøgh during the ceremony.

Afterwards the guests had the opportunity to discover the most modern and automated logistics centre in the region and get information about JYSK’s achievements and plans for the future.

JYSK also offered insights of the warehouse operations and the functioning of the system for automated storage, handling and transportation of JYSK articles, which is implemented for the first time in Bulgaria.

”The distribution centre here in Bozhurishthe is built using the latest technology, and it is by far the most modern in the region. When it is fully implemented in our supply chain, it will bring a lot of advantages to customers, stores and to the environment,” explained Logistics Manager Jan Oliver-Schmidt.

The distribution centre in Bozhurishte is the 8th JYSK logistics facility in Europe. It is currently delivering items to nearly 80 stores in Bulgaria, Greece and Serbia.

The highlight of the new logistics centre consists of the two high bays that are fully automated and do not need any human input in their working process.

With the total investment of 107 million EUR for the distribution centre, JYSK won the prestigious award “Investor of Year 2018”, which was presented in March this year.